Skip to content
Home > Current Affairs > 14 August as Partition Horrors Remembrance Day | Why and How Did India-Pakistan Partition Happen? 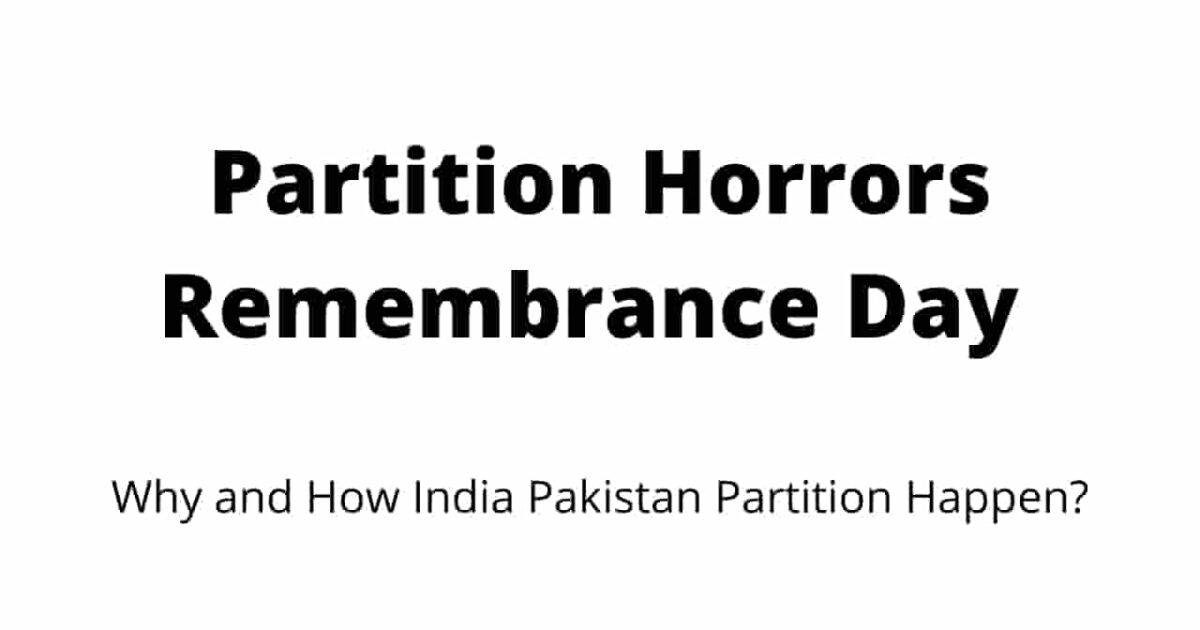 Partition Horrors Remembrance Day and Why Partition Happen between India and Pakistan?

Prime Minister Narendra Modi announced August 14 would be observed as Partition Horrors Remembrance Day across the country to commemorate the “struggles and sacrifices of our people.”

In a tweet, Narendra Modi said, quote, “The pains of partition will never be forgotten. Due to mindless hatred and violence, millions of our sisters and brothers have been displaced, and many have died. Partition Horrors Remembrance Day will be observed on August 14th in memory of our people’s struggles and sacrifices. “

May the #PartitionHorrorsRemembranceDay keep reminding us of the need to remove the poison of social divisions, disharmony and further strengthen the spirit of oneness, social harmony and human empowerment.

Partition’s pains can never be forgotten. Millions of our sisters and brothers were displaced and many lost their lives due to mindless hate and violence. In memory of the struggles and sacrifices of our people, 14th August will be observed as Partition Horrors Remembrance Day.

Why and How Did India Pakistan Partition Happen?

For the first time, elections to provincial legislatures were held in 1937. Only about 10% to 12% of the population had access to the ballot box.

In the elections, Congress did well, winning an absolute majority in five of the eleven provinces and forming governments in seven of them. It did poorly in Muslim-only constituencies, but the Muslim League performed even worse in the election, receiving only 4.4 per cent of the total Muslim vote cast in this election.

The League did not win a single seat in the North-West Frontier Province (NWFP), and only two out of 84 reserved constituencies in Punjab and three out of 33 in Sind were won by the League.

In the United Provinces, the Muslim League wanted to form a coalition government with Congress. Congress, which had won an absolute majority in the province, turned down the offer. According to some scholars, the Muslim League was persuaded by this rejection that if India remained united, Muslims would have difficulty gaining political power due to their minority status.

The Congress ministries also contributed to the growing schism. The Congress had rejected the Muslim League’s proposal for a coalition government in the United Provinces because the Muslim League supported landlordism, which the Congress wanted to abolish despite no concrete steps being taken in that direction (abolition). The Congress also didn’t make much progress with its “Muslim mass contact” programme, which it started.

In the end, the Congress’ secular and radical rhetoric merely alarmed conservative Muslims and the Muslim elite while failing to win over the Muslim masses.

On March 23, 1940, the Muslim League passed a resolution demanding a measure of autonomy for the subcontinent’s Muslim-majority areas. This ambiguous resolution made no mention of Pakistan or partition.

The British Cabinet sent a 3-member mission to Delhi in March 1946 to examine the Muslim League’s demands and recommend a suitable political framework for a free India. The Cabinet Mission spent three months touring the country and recommended a three-tier confederation.

Neither the Muslim League nor the Congress agreed to the Cabinet Mission’s proposal. Only Mahatma Gandhi and Khan Abdul Ghaffar Khan of the NWFP continued to argue and oppose the partition.

After withdrawing its support for the Cabinet Mission Plan, the Muslim League decided to pursue its Pakistan demand through “Direct Action.”

It declared August 16, 1946, to be “Direct Action Day.” Riots erupted in Calcutta, lasting several days and killing tens of thousands of people.

By March 1947, violence had spread throughout northern India. The Congress high command voted in March 1947 to divide Punjab into two halves, one with a Muslim majority and the other with a Hindu/Sikh majority, and to apply the same principle to Bengal.

Many Sikh leaders and Congressmen in Punjab believed that Partition was an unavoidable evil; otherwise, they would be suppressed by Muslim majorities, with Muslim leaders dictating terms.

In Bengal, too, a section of Bhadralok Bengali Hindus who wanted political power to stay in their hands began to fear the “permanent tutelage of Muslims”. Because they were a numerical minority, they believed that the only way to ensure their political dominance was to divide the province.

The new Dominion of Pakistan was established on August 14, 1947, with Muhammad Ali Jinnah sworn in as its first Governor-General. The following day, on 15 August 1947, India became an independent country, with Prime Minister Jawaharlal Nehru taking office, and Viceroy Mountbatten remaining as the country’s first Governor-General.

Timeline of India and Pakistan Partition

1930: Mohammad Iqbal, an Urdu poet, speaks of the need for a “North-West Indian Muslim state” as an autonomous unit within a single, loose Indian federation in 1930.

1933: Choudhry Rehmat Ali, a Punjabi Muslim student at Cambridge, coined the name Pakistan or Pak-stan in 1933.

1940: In Lahore, the Muslim League passed a resolution demanding a measure of autonomy for Muslim-majority areas.

14-15 August: Pakistan is formed on the 14th and 15th of August, and India gains independence. Mahatma Gandhi visited East Bengal’s Noakhali in 1947 to restore communal harmony.