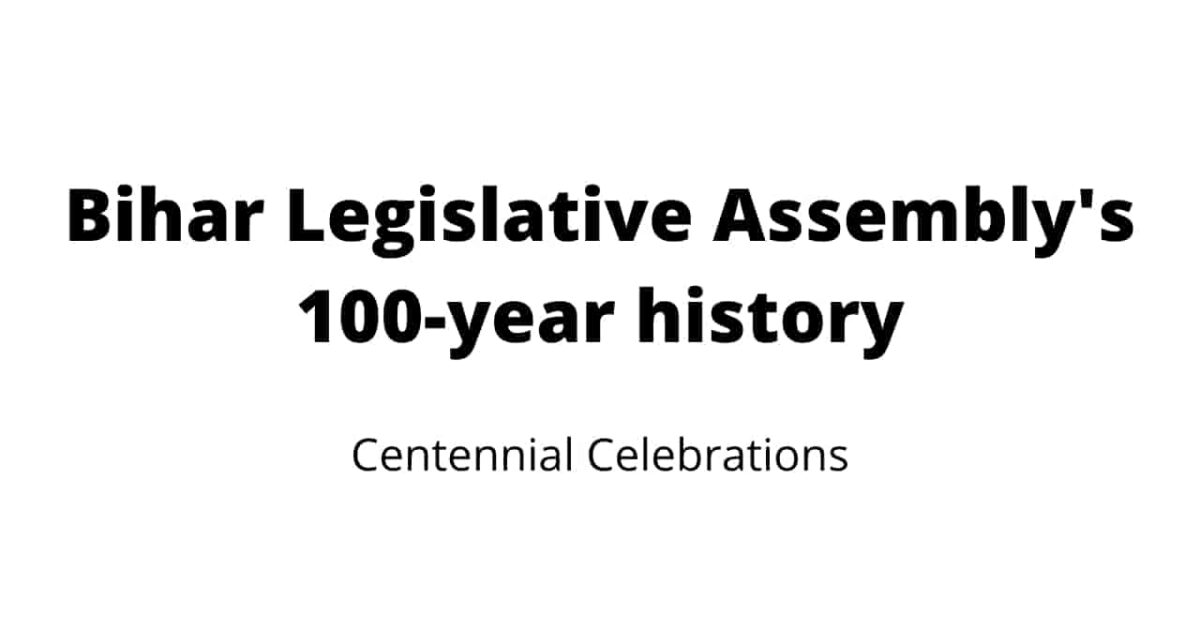 Bihar Vidhan Sabha Centennial Celebrations (October 21, 2021): The President of India, Ram Nath Kovind, attended the Bihar Legislative Assembly’s centennial celebrations in Patna and addressed the members of the legislature. On the occasion, he also laid the foundation stone for Shatabdi Smriti Stambh and planted a Mahabodhi Tree in the Bihar Legislative Assembly grounds.

History of the Bihar Legislative Assembly

Bihar has a long and rich history. As history began in the sixth century BCE on the Indian subcontinent, Bihar was at the forefront of political and intellectual life. The Nanda dynasty established a powerful empire from Rajgir, and later the Mauryas and Guptas established a pan-Indian empire from Patliputra (Modem Patna).

Bihar also experienced intellectual flourishing during this period, with the rise of two profound doctrines, Buddhism and Jainism. At Vaishali, the Lichchavis led a confederacy in the sixth century BCE in which significant political and administrative decisions were made collectively by an assembly with 7707 members.

The ancient Pali literature contains detailed rules for conducting the assembly, including the procedure for introducing resolutions, voting by ballot, deciding by a majority of votes, referring contentious issues to committees, and quorum rules.

The great Buddha admired Vaishali’s constitution and modelled his own religious sangha after it. Clearly, the Bihari people have a long history of democratic governance, as evidenced by the Vaishali Sangha and several other contemporary sanghas.

Bihar became a part of the Bengal Presidency during the East India Company’s rule. On 12 December 1911, British Emperor George V in Delhi Durbar announced the formation of a separate province by combining Bihar and Orissa, with Patna as its capital and relocating the British Indian Government’s headquarters from Calcutta to Delhi.

The formation of Bihar and Orissa state was notified on 22 March 1912, and Sir Charles Stewart Bailey was appointed the state’s first Lieutenant Governor. A 43-member Provincial Legislative Council was formed to exercise legislative authority over this newly created province.

The newly formed Bihar and Orissa Provincial Legislative Council met for the first time in Patna on January 20, 1913. This is the same council that, after substantial changes to its composition and constitution, is now known as the Bihar Legislative Assembly.

The Government of India Act 1919 established a new administrative system known as Dyarchy. Administrative subjects were classified into two categories, namely ‘reserved and ‘transferred’. The Governor administered reserved subjects through his Executive Council, whereas the Governor administered transferred subjects through the Provincial Legislative Council.

Simultaneously, the provinces of Bihar and Orissa were elevated to Governor’s province status, and a new Governor was appointed in place of the Lieutenant Governor, Lord S.P.Sinha became Bihar and Orissa’s first Governor.

At this point, the Provincial Legislative Council’s need for an independent building and secretariat became apparent. As a result, a new building for the Council Secretariat was constructed in 1920, which serves as the Bihar Legislature’s main building today.

The first meeting of the Bihar and Orissa Provincial Legislative Council was held on 7th February 1921, under the Presidency of Sir Walter Maude, and was addressed by Governor Lord S.P. Sinha.

The British Parliament passed the Government of India Act 1935 following the 3rd Round Table Conferences and the Poona pact. Bihar and Orissa were separated and declared independent states under the Act.

Thus, the Bihar Legislative Council was formed, and its inaugural meeting with 30 members was held on 22nd July 1936 in a new hall built on the north side of the Assembly hall under the chairmanship of Rajiv Ranjan Prasad.

On 22 July 1937, the two houses convened their first joint session. The Speaker of the Bihar Legislative Assembly, Ram Dayalu Singh, was elected. In 1939, following the outbreak of the First World War, the British Indian Government declared Indian participation in the war without consulting the responsible provincial governments.

The first and second general elections to the Bihar Legislative Assembly were held in 1952 and 1957, respectively, following the enactment of the Indian Constitution in 1950.

In 1952, 330 members were directly elected, while one member was nominated. Following the State Reorganization Commission’s 1956 recommendations, Bihar’s geographical boundaries were altered once more. As a result, the assembly’s elected members were reduced to 318 from 330.

Throughout 1962, 1967, 1969 (Mid-Term Election), and 1972 elections, the house retained strength of 319. In 1977, the total number of elected members increased from 318 to 324 in proportion to population growth, while the number of nominated members remained unchanged, bringing the total strength of the Bihar Legislative Assembly to 325.

After the Indian Parliament passed the Bihar Reorganization Act, 2000, a new state of Jharkhand was formed out of Bihar. As a result, on 15 November 2000, 81 members and one nominated member were elected to the newly formed Jharkhand Legislative Assembly, constituting 82 members out of 325.