Kothapalli Jayashankar was born on 6 August 1934 to Lakshmikantha Rao and Mahalakshmi of the Vishwakarma community of Akkampet village, Atmakur Mandal, Warangal of Telangana state.

He completed his early education in Hanamkonda,Warangal and M.A. Economics at Banaras Hindu, Aligarh Universities and Ph.D. and B.Ed from the Osmania University of Hyderabad. 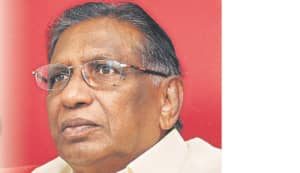 Kothapalli Jayashankar was a social Activist, an ideologue of the Telangana Movement who was been fighting for a separate state since 1952 and the person who stated the unequal distribution of river water, was the root cause of separate Telangana movement.

He is also an Educator, who was popular known as Professor Jayashankar and later become the Vice-Chancellor of Kakatiya University.

There was a Rule during the times of Nijam’s, that all the students need to sing a song praising the Nizam, the then headmaster of the Markaji High School in Hanamkonda asked his students to sing the song, a 6th student K. Jayashankar ignore the rule and sang Vande Mataram.

As a Student Leader in 1952 he walked out of class by making disapproval against state reorganization and Participated in 1952 Mulkhi Agitation and Telangana Movement and also part of Non-Mulki go back and Idli Sambar go back movement of  1952.

As a lecturer, in 1968, he participated in the revived agitation. He carried out his struggle for Telangana through his research and studies to educate people on the cause. In 1969, Professor organized a 10 member team in consultation with Prof. Rawada Satyannaraya, to fight against the implementation of the agreements and guarantees of the state reorganization plan.

A large number of articles and research papers, in English and Telugu, are authored by Professor Jayashankar which depicts various aspects of the Telangana Problems. He also started Telangana Janasabha that was banned by the Indian government.

He is also has given lectures on various facts of the Telangana Movement in ten major cities of the United States during July/August 2000.

Teaching career of Pross Jayashankar include

1)Made in-depth studies on the problems emanating from regional disparities in the levels of development with special reference to A.P.

2) Taught Economics and supervised research at the Doctoral Level.

3) Has to his credit a large number of papers published in the areas of Economic Development and Educational Economics.

He died on 21 June 2011, 11.15 AM. At his last stage, he was the Chairman of the Center for Telangana Studies and a member of Telangana Aikya Vedika and was on its Executive Committee.

Member of the National Executive: All India Federation of University and College Teachers Organisations

Satavahana Dynasty Telangana History Satavahana Empire Most Frequent and commonly asked Questions in all Exams. Quick To Memorize According to Matsya Purana there […]