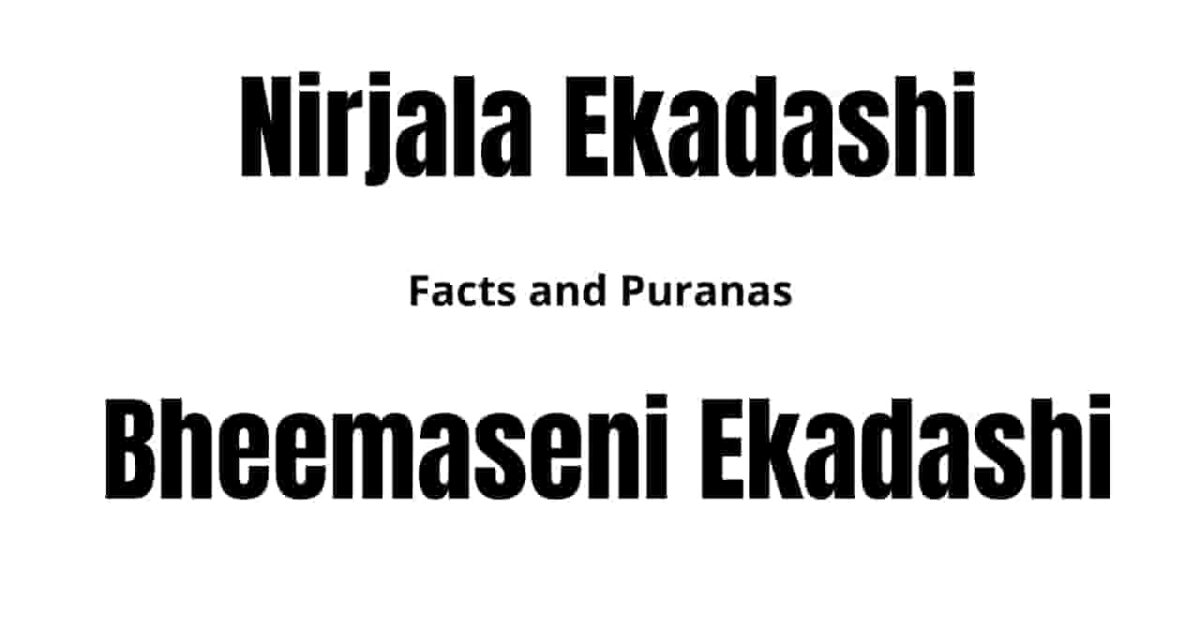 The name of this Ekadashi comes from the Nirjala fast ( fasting even without water) that is performed on this particular day. It is regarded to be the most austere and, as a result, the holiest of the 24 Ekadashis, and hence the most important. If followed religiously, it is considered to be the most rewarding and beneficial, since it grants the virtue acquired from the observation of all 24 Ekadashi’s in a year, according to tradition.

The Nirjala Ekadashi is referred to as the Bhemseni Ekadashi, after the Mahabharata character Bheema, who is commemorated on this day. Bheema was the second son of Kunti and King Pandu, and he liked eating a lot. He was never able to maintain a fast while also controlling his hunger.

Despite his desire to follow all of the Ekadashi fasts, Bhima was unable to do so due to his uncontrollable hunger. He sought help from the sage Vyasa, the author of the Mahabharata and the grandfather of the Pandavas, who provided him with a remedy. According to the guru, he should observe Nirjala Ekadashi, which is a day in the year when he should observe an absolute fast for one day. By following the Nirjala Ekadashi, Bhima was able to acquire the virtue of all 24 Ekadashis.

While other Ekadashis are marked by fasting from food, the Nirjala Ekadashi is marked by complete fasting from all food, even water. The water-less fast is considered very difficult to observe since it occurs during the summer, and as a result, it is seen as an example of great pious discipline.

The fast is observed for 24 hours, beginning at dawn on Nirjala Ekadashi and ending at sunrise the next day. Others observe it from the beginning of the day until the end of the day. On the day before Nirjala Ekadashi, the devotee prays in the evening (Sandhyavandanam) and consumes just one meal, which is without rice, since rice consumption is banned during the festival.

As part of the Achamana cleansing rite, the devotee is allowed to drink a small drop of water, which is then spat out, drinking more water is not allowed.

During an abhisheka, an image of Vishnu or a Saligrama stone (shape of Vishnu), is bathed with Panchamrita, a mixture of five foods includes milk, curd, ghee, honey, and sugar.

Giving away to Brahmins

One other feature of Ekadashi is its generosity to the Brahmins. On Nirjala Ekadashi, it is customary to give items such as clothing, food grains, umbrellas, hand fans, pitchers filled with water, jewellery, and other valuables to them.

Several Puranas, including the Markandeya Purana and the Vishnu Purana, claim that the day of Ekadashi is an incarnation of Vishnu. The vrata practised on this day is believed to cleanse the soul of all sin. A person who completes the vrata of Nirjala Ekadashi is said to earn the love of Vishnu, who rewards him with pleasure, prosperity, and forgiveness of sins as a result of their efforts.

One who follows the Nirjala Ekadashi rites is said to be saved from Yama’s judgement and to be taken to Vaikuntha, the home of Vishnu, after death.