After Kumbha Mela, a festival that attracts the largest number of devotees in the country is Sammakka Saralamma Festival.

Sammakka Saralamma Jatara which is also known to be Medaram Jatara.

Festival/ Jatara starts in Medaram in Tadvai Mandal of  Jayashankar Bhupalpally district. Medaram is in a remote place of Eturnagaram Wildlife Sanctuary.

Jatara is celebrated, because of the fight of mother and daughter, Sammakka and Saralamma, with the reigning rulers against an unjust law and it is believed by the tribals that it is the time when the goddess visits them.

It is a Hindu tribal festival,  according to the tribal story in the 13th century, some tribal leaders who went hunting found a newborn girl (Sammakka) emitting enormous light playing amidst tigers. She was adopted and bought up by the head of the tribe and became a saviour of the tribals of that region. 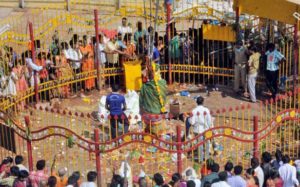 She was married to Pagididda Raju, a feudatory tribal chief of Kakatiyas. She was blessed with 2 daughters and one son namely Sarakka, Nagulamma and Jampanna.

Jatara is held once every 2 years for 4 days with a crowd of Millions of people from different states of India i.e., Telangana, Andra Pradesh, Madhya Pradesh, Chhattisgarh, Orissa, Maharashtra, Karnataka and parts of Jharkhand)

in 2012 the estimated crowd is of 10 million people celebrated on 8-11 February.

People take bath in Jampanna Vagu which is a tributary to the river the Godavari and offer bellam (jaggery) equal to their weight to the goddesses. Jampanna is the son of the goddess Sammakka and a tribal warrior who fought against Kakatiya Army and died in battle hence took the name jampanna vague. 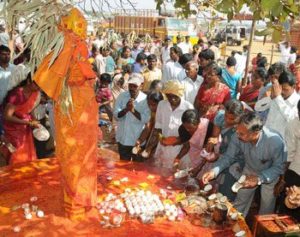 Vague is still red in colour marked with the blood of Jampanna and taking a holy dip in the red water of Jampanna Vague reminds them of the sacrifice of their gods who save them and also induces courage into their souls.  The bridge is constructed over Vague called as Jampanna Vague Bridge

In the early days, the only transport to reach medarm was a bullock cart but now Government declared the festival as 1000 yr old festival and laid down roads as a result many buses and private vehicles are available.

Satavahana Dynasty Telangana History Satavahana Empire Most Frequent and commonly asked Questions in all Exams. Quick To Memorize According to Matsya Purana there […]