Attractions of Telangana include many Historical Monuments, places, waterfalls, forests, lakes, and Museums which date back Hundreds of Years that give you, a subtle glimpse of years.

Telangana is a state with rich culture and heritage in which Hyderabad and Warangal are the two largest cities with many tourist places.

Kakatiya kala Toranam one of the historical arch also known as Warangal gate has been officially incorporated as the “Emblem of Telangana” for the Telangana state.

The Warangal Fort has four ornamental gates which originally formed the gates to the now-defunct great Shiva temple which are known as Kakatiya Kala Thoranam or Warangal Gates.

During the period of the Kakathiya Dynasty historical arches of Warangal fort has four ornamental gates to Great Shiva temple which is no longer available now( defunct Shiva temple). These gates are known as Kakatiya Kala Thoranam or Warangal Gates.

The architectural feature of the Warangal fort known as kakathiya kala thoranam is said to have similarities with the gateways of the Sanchi stupa.

Arch, reflective of four identical gates in the Warangal Fort, which was part of the great Swayambhusiva temple of Shiva in the fort built by Ganapati Deva (1199-1262) during the 12th century of the Kakathiya dynasty.

Rudrama Devi and Pratap Rudra II of the Kakatiya Dynasty added more fortifications to the fort and the four gateways (charkamou) which were part of the temple were destroyed by the Muslim invader Ulugh Khan during the 1323AD. This Great Monument was included in the list of UNESCO World Heritage Sites.

Archaeologists generally agree that an earlier brick-walled structure was replaced with stone by Ganapatideva, who died in 1262 AD, and that he was succeeded by his daughter Rudrama Devi, who ruled until 1289 AD and then her grandson Prataparudra II, whose reign came to be known as a “Golden Age”. 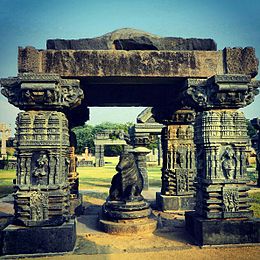 Twenty years later his kingdom was conquered by the Sultans of Delhi.

Ganapatideva, Rudramadevi, and Prataparudra II all added to the fort’s height, building gateways, square bastions, and additional circular earthen walls. These places were constructed towards the end of the Kakatiya period.

Warangal Fort is known as Kila Warangal and it is also included in the list of UNESCO World Heritage Sites.

Ramappa temple is located in Palampet village of Venkatapur Mandal, which is known as Ramlingaswara Temple.

An inscription in the temple dates it to the year 1213 AD and says it was built by General Recherla Rudra, during the period of the Kakatiya ruler Ganapati Deva.

It is Shivalaya where Ramalingeswara Swamy was worshipped and two small Shiva shrines present on either side of the main temple. There is also a Nandi, facing the shrine of Shiva. 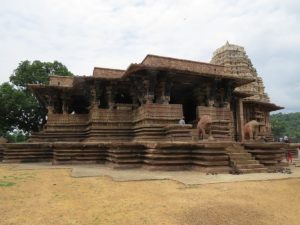 The Garbhalayam ie., the roof of the temple is constructed with bricks which are so light that they can even float in water.

Many Hindu temples were developed under Ganapati Deva, Rudrama Devi and Prataparudra who were the rulers of the Kakatiya dynasty. 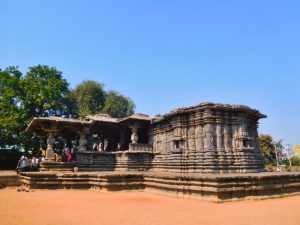 It is a Hindu temple dedicated to Lord Shiva, Vishnu and Surya which was located in the town of Hanamakonda, Telangana State.

Not only “Warangal Fort” and “Ramappa Temple”, but “1000 pillar” are also added to the list of World Heritage sites recognized by UNESCO.

Bhadrakali temple is located on the hilltop of both cities of Hanamkonda and Warangal  of Telangana state, where Goddess Bhadrakali is worshipped

Bhadrakali one of the oldest temple was believed to be constructed by Pulakeshin II of the Chalukya dynasty in 625 A.D to celebrate his victory over the Vengi region of Andhra Desham.

Later the temple was adopted by the Kakathiya dynasty and considered Goddess Bhadrakali as their “Kula Devatha” and  Ganapatideva built a Lake adjacent to the temple.

Due to the Muslim rulers of Delhi invasions temple lost its Importance and Sri Ganapathi Sastri renovated the temple in 1950.

Lalnavaram Lake was built by Kakathya Kings which was Located 80kms away from Warangal in Govindoraopet Mandal of Telangana State.

It is surrounded by 13 islands and has a 160 meters long hanging bridge, which connects three islands with a  spread of 10,000 acres and holds about 2.135 tmcft of water and irrigates over 3,500 acres of land.

it is a very popular tourist spot with thick deciduous forest and includes cottages, a tower, a pantry.

Padmakshama Amma temple is located on the hilltop of the Warangal district of Telangana state. It is believed to be constructed by kakatiya dynasty, originally it been a Jain Temple (kadalalaya basadi) and later Kakathiya was renovated and dedicated to Goddess Padmakshi.

This temple has a rich sculptures of the Jain Tirthankara’s and other Jain Gods and Goddesses. Every year women gather to celebrate the Bathukamma festival to immerse the flowers in the pond at the foot of the Padmakshi amma.