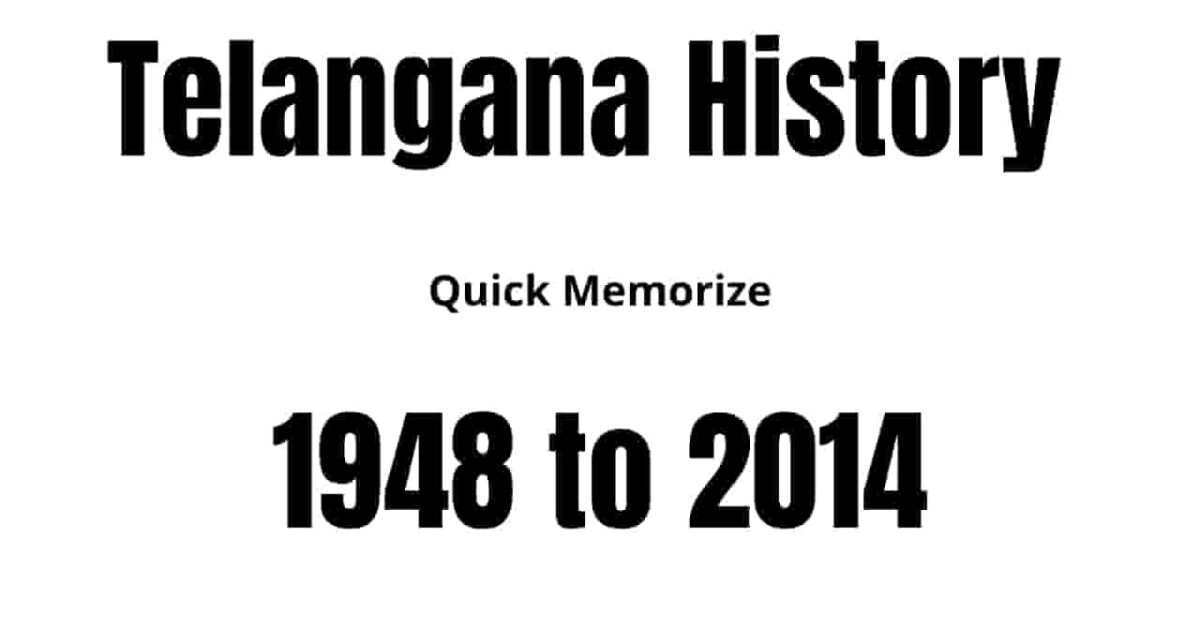 People in the Telangana region of Hyderabad state began organising themselves in the early 1950s with a desire for a separate state. The States Reorganization Commission (SRC), established by the Indian government in 1953, was appointed to investigate different statehood claims throughout the country. The Commission was presided over by Fazal Ali, Kavalam Madhava Panikkar, and H.N. Kunzru, with Fazal Ali serving as chairman.

They travelled the whole country in order to hear from people from all different sections of the society. The people of the Telangana region filed numerous memorandums to the SRC, expressing their desire for Telangana to be recognised as a separate state.

The creation of the Telangana state was justified by intellectuals such as the late Prof Jayashankar as well as political leaders such as Dr H.C. Heda and Dr Sri Konda Venkat Ranga Reddy who submitted memorandums containing historical, political, economic, social, and cultural justifications for the state’s formation. The Commission presented its report on September 30, 1955, and proposed the establishment of the state of Telangana.

People in Telangana staged a series of protests between September 1955 and November 1956, seeking statehood and the implementation of the SRC recommendations. The protests lasted from September 1955 until November 1956, However, strong lobbying by politicians from Andhra state in New Delhi resulted in the merger of the Telangana region in Andhra state to form the state of Andhra Pradesh.

Before the merger, Telangana politicians demanded a Gentlemen’s Agreement between the two states. Politicians from Andhra Pradesh and Telangana signed the agreement, which included protections intended to prevent Andhra leaders from discriminating against Telangana. The Andhra politicians, on the other hand, have been violated the agreement from day one.

As a consequence of the non-implementation of the Gentlemen’s Agreement and the continued discrimination against the Telangana region in government employment, education, and public expenditure; because of this discrimination, the Telangana statehood movement was started in 1969.

Students increased the intensity of their demonstrations in support of a separate state in January 1969. On the 19th of January, an agreement was made amongst all political parties to guarantee the effective implementation of Telangana safeguards.

The key elements of the agreement were as follows:

However, when more and more students and employees were involved in the statehood movement, the protests became even more intense. Then-Prime Minister Indira Gandhi convened a high-level conference to address the issue of statehood.

After many days of discussions with leaders of both areas, on 12 April 1969, the Prime Minister formulated an Eight Point Plan. Telangana Praja Samithi (TPS) was established in 1969 by Sri M. Chenna Reddy as the political party that would lead the statehood movement in Telangana.

In March 1971, Indira Gandhi called for quick parliamentary elections in the country. Telangana Praja Samithi won 10 out of 14 parliament seats. Indira Gandhi’s Congress (R) Party, on the other hand, won a landslide election on a platform of progressive programmes such as poverty eradication, Garibi Hatao.

She was reluctant about accepting the demand for Telangana statehood at that point. After developing a Six-Point Formula to protect the interests of Telangana, Sri M Chenna Reddy merged the Telangana Praja Samithi Party (TPS) with the Congress party. The statehood movement continued until 1973, after which it began to fade.

The state unit of the Bharatiya Janata Party (BJP) issued a resolution in 1997 calling for the creation of a separate state of Telangana. Despite the fact that the party was responsible for the creation of the states of Jharkhand, Chhattisgarh, and Uttarakhand in 2000, it did not establish a separate state of Telangana, citing opposition from its coalition partner, the Telugu Desam Party.

In early 2000, Sri Kalvakuntla Chandrashekar Rao (KCR), who was then the Deputy Speaker of the Andhra Pradesh State legislature, began doing background research on the Telangana issue. KCR announced the formation of the Telangana Rashtra Samithi on May 17th, 2001, after extensive talks and debates with a wide range of Telangana intellectuals and leaders in the state.

In order to establish the Telangana Rashtra Samithi party, KCR had resigned from his positions as Deputy Speaker and Member of the Legislature. Prof Jayashankar, a leading proponent of the statehood movement, has expressed his support for KCR.

TRS and the Congress Party formed a political alliance in 2004 to win more seats in the legislature. The party gained 26 Assembly seats and 5 Parliament seats.  The issue of Telangana was included in the UPA-1 Common Minimum Program. The issue of statehood was also mentioned by President Abdul Kalam and Prime Minister Manmohan Singh during their respective speeches.

TDP MLAs resigned from their positions and walked out of the state government in April 2008 in protest over the delay in the establishment of Telangana.

TRS formed an alliance with the TDP, the CPI, and the CPM for the 2009 elections. Grand alliance failed to provide the expected results,  TRS only managed to get 10 MLA seats and 2 MP positions.

On November 29th, 2009, KCR announced an indefinite hunger strike in support of Telangana’s demand for statehood. However, he was detained by the state police and sent to the Khammam sub-jail. The campaign spread like wildfire, with students, employees, and members of civil society groups all joining in.

United Progressive Alliance (UPA) government declared on December 9th 2009 that the process of establishing Telangana statehood will be started.

However, after two weeks of resistance from the Seemandhra leadership, the UPA was forced to reverse course on this issue. Afterwards, KCR gathered together all political forces in the Telangana area in order to establish the Telangana Joint Action Committee (JAC), which serves as an umbrella group for various organisations and political parties, with Prof Kodandaram serving as its Chairman.

TJAC organised a number of agitations and demonstrations, and TRS cadre and leaders took part in them all with enthusiasm.

Formation of a Telangana State

After 4 years of peaceful and effective demonstrations, the United Progressive Alliance (UPA) government began the statehood process in July 2013, and the process was completed by passing the statehood bill in both houses of Parliament in February of the next year.

Telangana Rashtra Samithi won 63 of the 119 seats in the April 2014 General Elections, formed the government. Sri K Chandrashekar Rao was sworn in as the Telangana State’s first Chief Minister. On June 2nd, 2014, the state of Telangana was officially declared.

For Ts Police recruitment constable and SI and TSPSC exams like Group IV, VRO and others, Telangana History will be a huge scoring subject. It is expected an average of 15-20 Questions will come in the examination. Good Knowledge of Telangana history will boost scoring in the exam. As Per Syllabus for Ts Police Requirement and TSPSC, we came up with high-Quality Question Bit Bank series on Telangana History (Prepared by Experts)